Data is cool because data does not need a paycheck.  Unless it's Zillow's data, but #fuckzillow.

1681 single family existing homes on the market today, down slightly from last week and basically flat over the course of the last 7-8 weeks.  We're now going to be ramping down into winter so it would make sense for inventory levels to drop together with demand.  That being said I do think our inventory levels would be climbing higher if not for how much and fast rates have climbed.  I say this because a lot of homeowners today have mortgages at like 3% or less and moving to a new house at >6% rates and today's prices is not appealing.

Then 2020 hits and we all think we're gonna die.  I mean its a certainty that we will die but before we die it's best to refinance.  By 2020 you've paid the loan down to around 260k and rates dropped to let's say 2.75%.  Your new monthly payment is just under $1,300 a month.  You're sitting pretty in a house you liked enough to buy in the first place.

Then September of 2022 rolls around and you think maybe I'll buy myself another house that's right on the median.  You're just such a painfully average person that you can't fathom living any better or worse than the 50th percentile.  So you find a super average house for exactly $456,500 and finance it at right around 6.5%.  We will leave taxes and insurance alone even though they likely went up too.  Your run of the mill, middle of the pack, no bells or whistles median as can be house will now cost you $3,110 a month.  Es double amigo.

Sure you can sell your existing house and take the equity out of it, probably about 200k worth and put that as a massive downpayment.  If you do that your payment would be close to $1,850 a month anyway.  But wouldn't you rather buy a lightly used Lambo?

So you see the dilemma with these gosh darn fucking interest rates right?  Like no matter how you spin the problem it remains a problem.

It of course only remains a problem for us normal peasant types that have to take out mortgages to buy a place for our families to live.  This type of environment creates all kinds of opportunities for people and companies that have been sitting on piles of cash to take advantage of the situation and pick up the pieces as they start to drop.  But for us normal people it is indeed a problem.  And us peasant types will be the ones dropping the pieces.  It's that classic trickle up economics model, wait, what?  Oh yea.  Wealth consolidation.

Here is the good news.  Lumber is down to almost pre pandemic levels at under $450/1000 board feet.  That roughly $460-470 level of support got broken and will now be resistance, probably.  This is good news for builders but will not offset the increases in financing costs.

Copper is down over 35% since March.  That's nice.  We need it for bullets.

That's the good news.  The bad news is why that is all happening.

It's happening because of demand destruction.  You see when regular every day working people get squeezed from every angle financially they look for places to make cuts.  Driving less and a reduced demand for goods lowers demand for oil.  See Fedex's news release about the massive contraction in global shipping as an example.

When normal every day working people are priced out of buying houses by the increased cost of financing, especially new houses, the demand for the materials to build those houses drops as do the prices for those commodities.

It all sounds like good news sort of except keep in mind behind all of those commodities are people with jobs.  Sure it sucked ass paying close to $5 a gallon for gas, but how many jobs were created thanks to that in the energy sector?  In 2021 alone over 300k jobs were created in the energy sector, I imagine early 2022 continued that trend probably through the 2nd quarter.

It sucked ass paying 500k for a new build but how many trades got to feed their families here and probably all through Central America thanks to the volume of work?  Between the relative bottom of 2012 and the new top of 2022 over 2.5 million construction jobs were created.  Let's see how those hold up.

Sure it sucks that Amazon was the big winner of the Covid money grab but now that sales are slowing down and they've cut over 100k jobs it probably sucks to not have work, right?  You see what I'm getting at here.

Another big big super duper big factor is currency.  While obviously we're suffering with inflation here in the US it turns out other places have it much worse.  And as monetary policy tightens globally, with the exception of a few places like Japan and Turkey, people seek the USD as a safe haven asset.  This is a fear response that is not super logical considering the dollar is losing roughly 8% of it's value in the US every year, but people see it as safe and run to it when things get scary.

The DXY tracks the relative strength of the dollar against a basket of other global currencies.  Check this out. 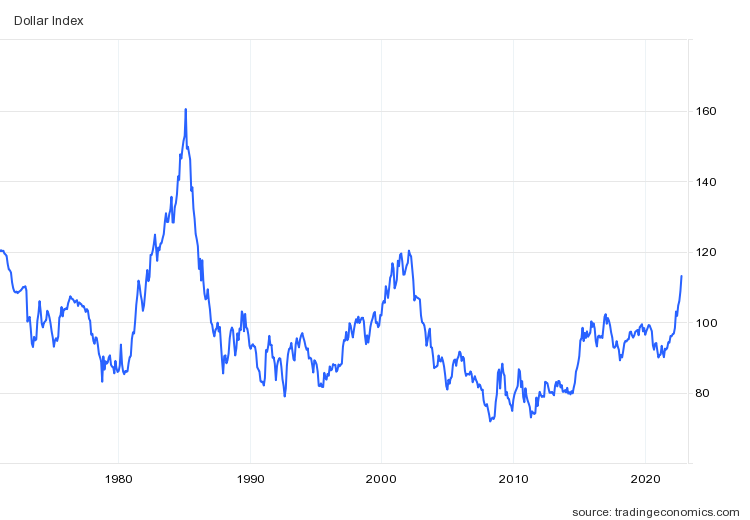 That's the DXY over the last 50 years.  Biggest spike on left is when Volcker defeated inflation by raising the Funds rate to something like 18%.  We're at 3% now.  Second big jump was going into 9/11 and the beginning of the war on terror.  And then we have today.

And on the surface it sounds like "Iggy, a strong dollar is a good thing.  I like all my things strong, my coffee, my whiskey and you're damn right I like my dollar strong too."  And it is a good thing if you're traveling to other countries and swapping your dollar dollar bills for whatever other currency.  Shit the Euro went from like $1.20 to 96 cents.  That's awesome, if you're traveling.

Where it sucks is when you're an American manufacturer who exports goods to other countries.  You see with the Euro example suddenly American products cost roughly 25% more to the European consumer.  This does not account for any tariffs that may also be in place.  And that is another form of demand destruction that leads to job losses here, in America.

And if there is one thing I can say with a pretty high level of confidence that is nothing like 2005-2008 is that you can't really get a mortgage without a job.  And that's how we will get further demand destruction in the real estate space.

To wrap this up let's run through some numbers for how good 2022 is going.

Housing here locally is up 2.5% YTD, I expect that to fall into the negative by year's end.

And the dollar in its relative strength as the DXY is up almost 20% year to date as people run for cover.

So with all those numbers in mind, and knowing that you need a roof over your head regardless, housing doesn't seem like that bad of an investment right?

I say this to you as I scramble to get a decent rate on a mortgage for a house I spent a year of my life building.  I feel the squeeze, I feel the pain, I just don't feel the excuses.

Have a great weekend.