371 homes on the market on the first Friday of May.  No wave of inventory breaking on the shores of our housing shortage.  I can end the update right there I guess but I'll elaborate.

People that think money can be created from nothing and then given to people for nothing without consequence are kind of like a 60 watt lightbulb.  Not very bright.  It doesn't take a degree in economics to understand basic supply and demand.  As the money supply grows and the demand on goods and services stays the same or increases then prices must go up.  It's really simple.  Here's an image of why everything is "unexpectedly" going up in price.  The news will blame it on anything like ships stuck in canals, on the cost of fuel, on this everything shortage we're hearing about.  The truth is its an abundance of increasingly worthless dollars that's causing everything to go up in price.

That spike on the right very closely correlates with the spike in housing prices in our region.  It reminds me of the last time that BAH went up and a few people were all like phew, now the soldiers will be able to afford housing easier!  And then like 2 weeks later prices jumped to account for the new BAH levels.  It's like the market gets it, and people don't.  You can't give away money without consequence, it is not possible, not in ancient Greece, not in modern Greece, not in America.

The graph above is the M2 velocity over the last 60 years.  Grey lines are recessions.  The yellow area on the right is whatever this shit show is that we're in today.  The new normal let's call it.  Notice how the money velocity has been steady crashing since the 2008 crisis. Why?  Because the response to 2008 was QE 1 to infinity, so the money supply has gone up a bunch but the real productivity of the US has not.  So the money velocity drops kind of proportionally to the increase in money supply.  Notice the big ass drop going into the pandemic.  This shows how hard it is to spend money when businesses are forced to close.  The little notch or rebound at the very far right is a visual representation of all the inflation talk on the news.  Imagine what prices will look like if money velocity was to return to something closer to "normal".

You don't have to imagine that hard, here's a picture. 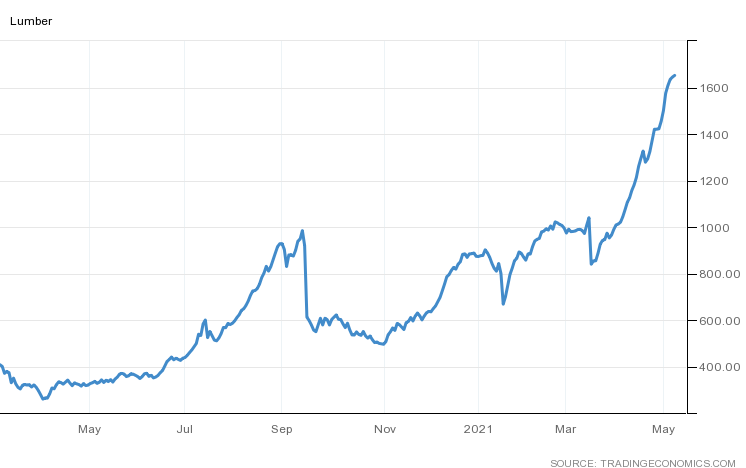 That's the price of lumber over the last 12 months.  Low interest rates are driving a ton of home buying and building.  There is a 9% tariff on the US side.  Canada is pissed off that the Biden administration cancelled Keystone XL and is firing back at us by raising the fees on cutting down Canadian timber.  Oh yea, and there is a bunch more money in circulation while demand is steady and rising, so you get a 600% price increase on lumber.  How will that impact the cost of housing?  Let me know what you think.

In a nutshell guys always keep in mind that real estate is the only infation hedge that you can live in.  The cost of housing keeps going up but peoples fixed interest rate mortgage payments stay the same.  That's why so many people aren't moving and hence why inventory is so low.  If your choice is to pay someone else's mortgage or your own then the decision to own real estate should be pretty simple.  A lot of people make this overly complicated and become life long renters.

I know I come off as abrasive in some of these blogs and its not my intention to sound like a total dick.  I just understand the gravity of the situation that we're facing and how it's disproportionally hurting lower economic classes while benefitting the rich.  Being a generation 0 immigrant to the US 10 years ago I had like 700 bucks in the bank and was scrambling for every dollar.  I now have over a million in real estate that produces positive cash flow that in a real pinch I could survive from.  That gives me peace of mind and my son the possibility of building generational wealth.  That motivates me personally and it makes me want to do the same for you.  It's incredibly frustrating hearing people say things like they're going to wait for the next crash to buy, or they'll buy when the market is better or whatever.  In my 8 years of selling real estate I've seen literally dozens of people take that approach and instead of buying a modest home they could afford in 2013 they now rent a shithole for 40% of their monthly income.  I'm not making fun of anyone here, and I feel for the people living that reality.  My point is you have to act, you have to look out for your own future, nobody else will do it for you.  Make a plan or be a part of someone else's.

Have a great weekend and a happy mother's day to all the mamas out there.