First off fuck the Federal Reserve and central banking as a whole.

Now that we got that out of the way let's talk about the 288 existing single family homes that are for sale in El Paso County today.  There are no cheap ones, the median price for February closed at a new record high of $465,000 on 1,009 total sales and we are seeing absolutely no signs of the market improving for buyers.  This amounts to roughly one house for every 2,541 residents and one listing for every roughly 19 Realtors.  I do still get a kick out of the make believe investors who reach out to me asking for me to help them find a "great deal" using "other people's money" so that maybe in the end I can get "full commission" on the listing.  I've got a special product coming for you guys towards the end of this year that you're going to love.  More on that later this year.

Interest rates.  On the one hand you have the propaganda machine talking about all the interest rate hikes the Fed has coming.  5 this year, no 7 this year, no JPMorgan says its gonna be 9 hikes this year!  This is market manipulation for profit.  This is financial propaganda.  Will the Fed raise rates this year?  Yea, most likely, and it's needed.  Will it be 9 hikes?  Highly unlikely.

But what's the bond market done?  10 year yields were over 2% just 2 weeks ago and scraped as low as 1.68% this week.  There's nothing like an old fashioned war to allow central banks to issue ever more debt while allowing insolvent government to borrow at super low rates.  Mortgage rates fell in the last week, at some points noticeably.

War.  What's better than war to take the focus off other problems?  It's masks off across the world, vaccine passports going away and just no more Rona on the news to speak of.  For that I'm extremely grateful, I just wish it wasn't to make way for images of shelled apartment buildings and seized nuclear reactors.

Sanctions.  They're like tariffs you know?  The fuck but they also fuck back.  What we're seeing right now in commodities markets is absolute chaos. 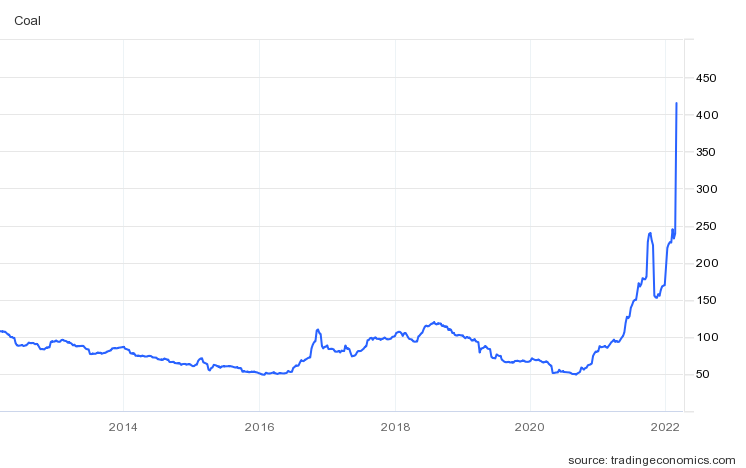 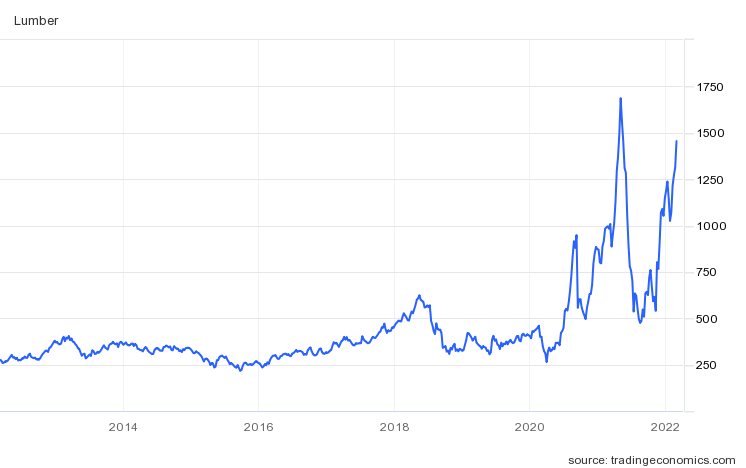 How about lumber?  Well that's shooting back up to the moon real quick.  Last year in May we had our peak over $1,700/1000 board feet and we're quickly trying to retake it.  It's March, let's see what happens during peak building season.

Right now 2x4s are coming in around $7.50 and a sheet of subfloor around $72.  Super duper tough to build anything close to affordable housing with materials at these levels.  But hey that 18% tariff on Canadian lumber though, that's patriotic AF.  It's probably best for the lowest income of Americans to get used to sleeping in RVs and tents, plenty of fresh air is good for the soul.  The government loves you and will give you a free cell phone.

Do you like to eat?  That's getting pricy too.  Luckily for all of you with gluten allergies this doesn't apply to you but check out the price of wheat. 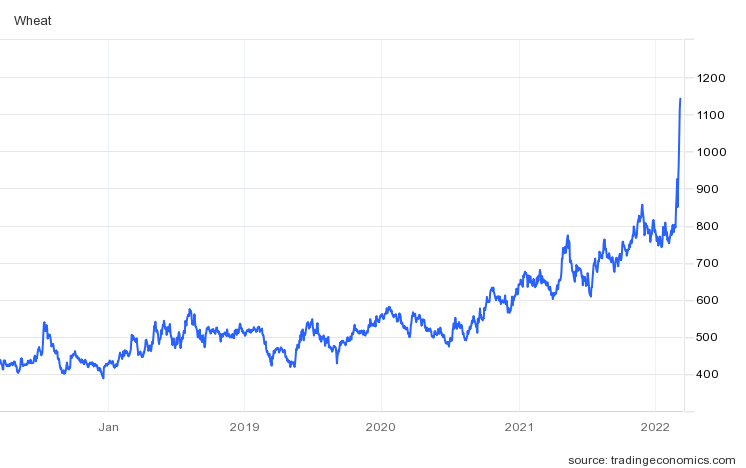 Yea that's fun to look at.  Wheat is in so many food products that it will have a sweeping impact on grocery prices.

You know what is used to make over 6,000 products?  Oil.  I know this one gets a lot of attention and this will be the commodity that all of the inflation gets blamed on because its so easy and relatable.  But just because the news is going to beat this horse to death doesn't mean it's not true. 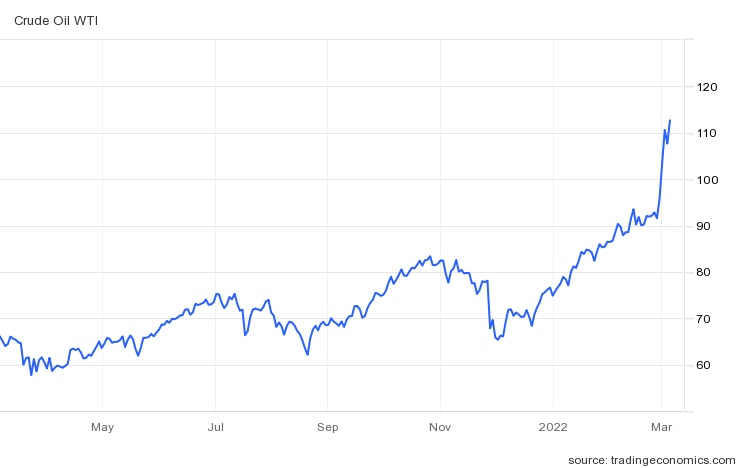 Long story short is congratulations on making it through the last crisis and welcome to the new crisis.  How far this new crisis will go only time will tell but one thing that is for certain is that just like the last crisis this one will be used to rationalize taking on a new mountain of debt.

As a new mountain of debt is monetized that money finds it's way into the real economy.  The value of the money goes down while the value of goods and services goes up.  I know I've been ranting about inflation for um, 4 years now, but now my concern is very much a reality.

Some example I've heard from friends and colleagues recently.

I'm not saying you should pay that much, I'm just saying if your life sucks and you bitch about housing being out of reach you should learn a trade and go make the kind of money that will allow you to live comfortably.  As the race to 0% commissions intensifies and Realtors fall out of every nook and cranny in society I'm seriously considering diversifying my business model too.  Not too good to take my own advice here and seriously, we need trades nationwide and the potential for a great living is there.  If you're too good to do what's needed then don't be upset when you're not needed.

In a nutshell the wealth gap is getting wider, the world is growing more nationalistic, and the likelihood of the long term debt cycle resetting here in the next few years seems pretty substantial.  Take only on debt that cash flows, invest in hard assets, learn a useful trade or skillset and overall adapt or die.