A day late is better than not doing stuff at all, right?

329 existing single family homes up for sale today as we ramp up into what should be peak inventory here in the next 6 to 8 weeks.  Month to date we have seen 697 units close MLS wide so we have like a roughly 1 week supply of inventory.  I won't harp on this longer as this situation has been as it is for a while now.

Month to date median sold price is steady at $470,000 and the average sold price jumped over $530,000.  We are seeing homes on the median sell for 3% over list price.  I was hanging out with a buddy of mine that lives in Denver last night, which is why I didn't write this yesterday, and they're still seeing homes in the million dollar plus range selling in hours and over list price.  So the very strong demand in Denver hasn't really died down, and the trickle down in to our market is still a thing.  As well as all the normal demand that we have here without Denver's squeeze.  I don't even know if we're Denver's main squeeze, I just don't know anymore, you know?

Rates.  Here is the last 6 months of the 10 year US treasury. 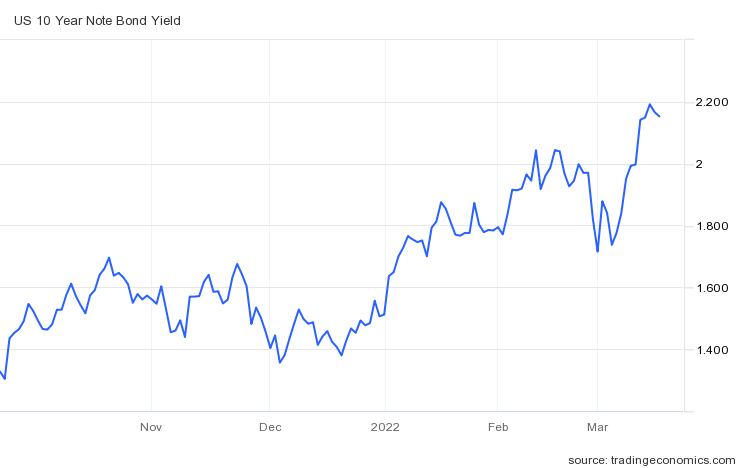 Please notice the plunge in rates at the end of February correlating with the beginning of Putin's greatest ever miscalculation and the end of Russia as we knew it(or at least as I knew it).  I guess shelling schools, apartments, hospitals and theaters was good enough to suppress rates for a couple of weeks, but that's it.  Interest rates rebounded quickly to the highest level since May of 2019.  The US bond market sees that the threat of Russia's military pushing into NATO's territory isn't very urgent as the Russian forces can't seem to break out of Pizza Hut's delivery radius of their own border.  It's like how do you do something so awful and be so awful at it at the same time.  What a pathetic failure of humanity.  And by the way, just in case you had doubts, the war is real.  There are no jobs there for crisis actors as the civilian population is taking it upon themselves to bear the brunt of Putin's small dicked insecurity.  I'd call him a bitch but I respect dogs too much.

How does this all relate to real estate in Colorado Springs?  Let's break down just one factor.  The 1.5 trillion USD spending bill that just passed congress thanks in no small part to having provisions for supporting the Ukrainian government.  We all know that no crisis can ever be wasted and this one sure as hell will not be.

Think about these numbers and then think about how this money will permeate it's way through our society and what it will do to the cost of things we all use, need and live in.

So that's between March and the end of September, we're going to dump 1.5 Trillion dollars into the system.  This isn't even like emergency levels of spending at this point, this is as some of you guys liked to say, the new normal.

This is getting long and I need to get to a 1 year old's birthday party.  Next week I think I'll probably rant about how the Fed said they're going to raise rates 6 more times this year and what I think the outcomes will be on the 27% chance that they're not lying.