Sup!  273 single family homes on the market today that are actively seeking buyers.  You know the drill, many more buyers seeking homes and so on.  Nothing has changed on the inventory side of things, multiple offers, back to back showings, and just an unquenchable thirst has gripped the market.

Rates.  They are higher than they were last year.  True.  Also true is that rates in the 3% range are lower than pretty much at any given time in several thousand years.  Number picture time.  Not the most up to date graph but in the 5000 year context close enough to convey the idea. 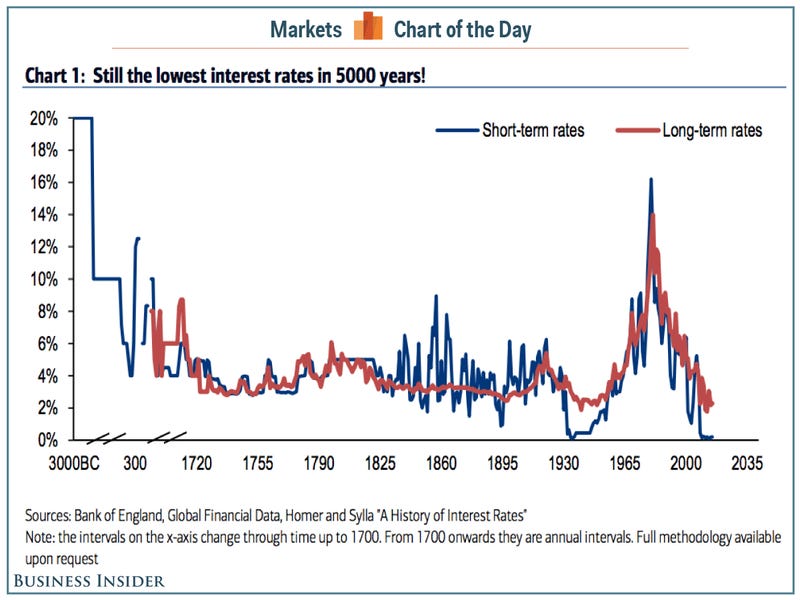 Guys I'm going to say something to you that may hurt your feelings.  If a house makes sense to you at 2.75% but not a 3.25% its because you're shopping outside of your budget OR you don't understand your rental alternatives well enough.  YES, higher rates do increase your mortgage payment.  However the difference in payment of say $100-200 a month should not deter you from buying the house you want UNLESS of course you're financially stretching to buy the house in the first place.  We often forget the tax benefits of home ownership that more than offset volatility in interest rates, and we also often forget that refinancing down the road is always an option.

But Iggy, you abrasive asshole, everyone is already stretching financially to get a house to begin with!  I'm gonna say another thing that may hurt some feelings.  Since 2010 I've bought and lived in 3 houses, I'm currently building our 4th.  The first house was a total piece of shit built in 1904.  With time and effort we made it nice.  The second house was a 768 square foot actual not figurative crack house that needed a complete remodel.  My room mate and I moved in there, drank beers, and slowly remodeled it.  Then I built a cottage there that serves as an AirBnb that pays roughly triple the mortgage.  The third house, you're not gonna believe this, was a piece of shit!  I bought it AFTER having it listed on the MLS, after over 100 people had a chance to buy it and didn't.  I paid my seller the same amount of money he would have netted from any buyer working with another agent.  Then I moved in, fixed the house up, and lived in it.  What is my point?

My point is that you're not automatically entitled to nice shit just because you live in America.  Your first house doesn't have to be amazing.  It doesn't have to be a status symbol or any kind of statement piece.  If you think of shelter in the same way you think of designer accessories and you make purchase decisions based on prestige rather than equity then I can tell you 100% I'm the wrong agent for you!  Bottom line is there are opportunities out there, scarce as they are, yet people pass them up because maybe there is a little more work to do than they're comfortable with.  And so folks get into payments that are more than they're comfortable with instead, and we generally know how that ends.

I said something on the book of face this week that ruffled some feathers.  Every place I go I hear people talking about getting, having gotten, or just about to get their real estate license.  Listen to me closely here.  I love to help people succeed, I love to see people succeed, and I love being inspired by the successes of others.  I know it's easy to see me as a hater when I call out the masses for getting their real estate licenses because it just seems like maybe I'm afraid of the competition or whatever.  The truth of the matter is that by shitting on people's dumb ideas I'm trying to encourage them to make smart decisions.  Example time.

We have less than 300 houses on the market.  Last year in an average month we sold something like 1,500 units across our MLS.  We have over 5,700 MLS participants.  Let's delete the appraisers and the assistants and we are left with no less than 5,000 agents that are competing in a market with only 300 listings.  Just on simple and uneducated math alone with 1,500 closings and 5,000 agents you can come to the conclusion that 3,500 agents went hungry in any average month.  But you would be wrong.

Take into account a famous and insanely reliable concept called the Pareto principle, aka the 80/20 rule.  Truth of the matter is good agents sell more than one house a month.  I've been distracted with my construction project, with my 16 month old son, with helping my agents with their business and I still close roughly 4 deals a month.  And other good agents do the same and more than I do.  So what does that leave for the rest of the Re-la-tors out there?  Not a whole lotta.

Now I rememeber 2013 pretty well, the year I got into this business.  There we're like 1,700 agents, over 4,500 listings and "you guys should sleep on this one" was a real thing that I would tell buyers all the time.  I remember the feeling of basically bouncing off the walls trying to master all the things I didn't even know I needed to know.  I would work without exaggeration about 60-70 hours a week on average without getting a penny for it.  The first sale I ever closed I made I think $1,300 after about 3 months of work, and the trusty brokerage I was at took the same amount for nothing.  Then I worked for a team where I worked 12-14 hours a day and sold like 7-8 houses a month until I realized I could sit on my hand until it went numb, sell 2 houses by my lonely, and make the same amount of money.  Woe is me, I worked really hard for a number of years to get where I'm at now.  Poor old me, you guys should feel sorry for me and all the seasoned agents in the game.  No.

If you or anyone you know is interested in coming into a business where you are legitimately not needed and then work so hard that people feel like they need you then please, please come in.  I will take you under my wing or I'm too much of an asshole I'll hook you up with good people that are softer and better humans than I am.  You can bust your ass, be made to feel like a disposable commodity, solve problems the complexity of which you didn't even envision before, sacrifice your personal life for the goals of others and IF you do it right, you're gonna make some money player!  But for the rest of you half hearted, unmotivated, short cut seeking wanna be Grant Cardones out there please do us all a favor and just fuck off.  In and Out is paying like 20 bucks an hour, or something.  Maybe I'm trying to save you guys time and money, or maybe I'm just a hater that's scared of competition.

Now.  Back to rates.  The yield on the 10 year T notes hit close to 1.9%.  That's a substantial jump from 1.4% just about a month ago.  The stock market hates that and has been dumping value all week.  The Nasdaq is now in correction territory and the SP500 is just about 1.5% away from correction territory.  Numberpicture below showing the speed of the sell off: 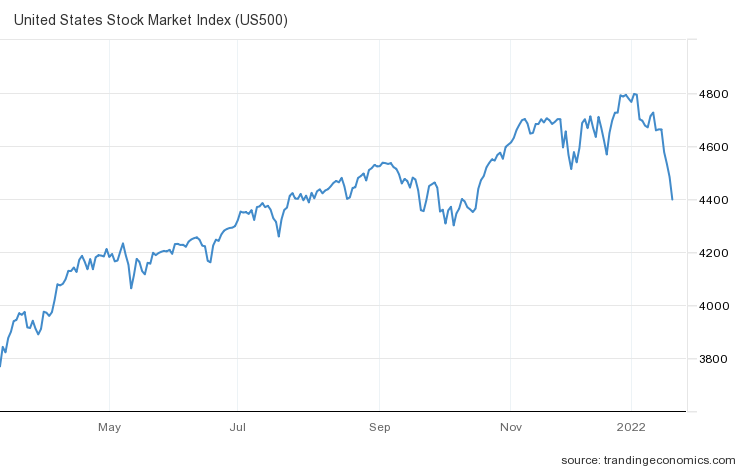 Is this the end of the world and are we all going to die?  Probably not.  This was however enough to check the rapidly climbing interest rates and bring them back to about 1.75%.  As I mentioned before a crumbling stock market gets the attention of our overlords much faster than the suffering of the lower income classes.  If the correction deepens expect the Fed to change their tone.  The IMF (Satan basically) came out and said today that the Fed's position on raising rates is seriously jeopardizing this completely make believe economic boom we're allegedly in.  Other bad news are making splashes like increasing numbers of unemployment claims, record levels of margin debt (I may rant on this next week) and of course the fact that laundry detergent will cost at least 8% more starting in the next couple weeks.  If you see me wearing the same pants 3 days in a row its because I'm a middle class environmentalist ok?  Not because I woke up in the those pants on the couch.

Anyway.  Owning real estate is still pretty cool.  Having clients that trust you to help them is super cool.  Having a brokerage where our agents help each other instead of laying their sales stats on the table is really cool.  And in general things are pretty cool.  But they wouldn't be for me personally if I bought into the hype of all the dumbasses around me over the years, so I suggest you don't either.  Second beer talking, over and out.