Well, well, well.  Last update of the year and what a ride it has been.  I'm going to try to really compare and contrast this year over last year and do my best to make some sort of logical forecast for the near and slightly more distant future.

Last year we saw 1,251 closed sales month to date with a median price of $440,000 with the average house selling slightly over list price.

This year we have 625 closed units for a nice drop in volume of 50% and a median sold price of $435,000.  The big difference is that homes sell for roughly 5% less than original asking price as opposed to above it.  The trend has definitely shifted directions.

To recap markets in general.

Our local real estate market year over year saw a loss of just over 1%.  From the May peak we have a loss of closer to 13%.  FOMO is a MOFO.

Redfin stock is down 89% this year, Zillow is down 48%, yet remarkably home builders are holding up ok for now.

So yea, real estate could and probably will dip further yet will likely outperform everything but gold.  Weird right?  It's like people need to live somewhere or something.

Interest rates are finishing the year the way they started it, rising.  We came into 2022 with the 10 year yield bringing something like 1.4% and ripped straight up.  We peaked (hopefully) right before the midterms at around 4.2%, pulled back to around 3.3% right after and today are at almost 3.9%.  A solid 2.5% higher than where we were a year ago.  Dumb people say its only 2.5% higher, smart people under stand this as a over 250% increase in the cost of borrowing.

Mortgage rates are finishing the year roughly double where they started it.  Low 6s roughly today.

Es no bueno not only for the housing market but for this debt based economy as a whole.  Let's touch on debt a little bit.

Through Q3 of 2021 total household debt in the US was 15.25 Trillion with around 11 of that in mortgages and the rest in credit cards, cars and personal loans.  Q3 of 2022 showed just over 16.5 trillion in total debt with 12 trillion in mortgages and the rest in other debt.  The jump in mortgage debt has been soaring ever since that one thing popped off in 2020 and we started printing money to heal up.  Rememeber that?  That was so fucking stupid.

One positive aspect of this versus 2008 can be seen in the following number picture depicting house hold debt versus GDP.

This graph is a good illustration of why taking on housing debt for the long haul is not the worst idea in the world.  It's because if you take out a loan for 30 years on an asset that produces income, such as a rental property, you have the advantage of inflation over the long term pushing up your income while the payment on the loan stays fixed.  Basically you benefit from this crisis after crisis cycle that we live in where the Central Bank devalues your debt while everyone shits their pants over the next news break.  Real estate is for the long haul amigos y amigas.

Hey remember last year when lumber was shooting through the ceiling and your boy had to redesign his house to be ICF?  And builders were blowing up contracts and being complete dicks to buyers.  Remember that? 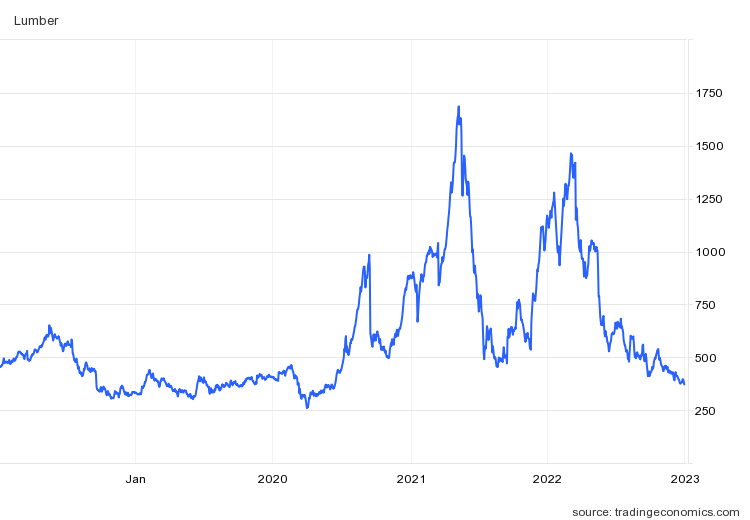 Look at that thing reverting to the mean man.  JUST LOOK AT IT.  Sorry.  Not trying to yell.  What an amazing illustration though of what government intervention in economies across the globe can do to markets.  Just like totally fucks markets up.  Hey European friends, you guys let me know how that oil price cap is working out will you?

Foreclosure activity seems to be picking up in talking with my friends that do a lot of REO business.  Kind of hard to get a gauge though as to what that really means because for the last almost 3 years there really were almost no foreclosures.  So as we bounce back from 0 it seems like an influx for sure.  The best stats I have right now is that November of 2022 saw 60 new foreclosure starts in El Paso County, with last year at 24, 2020 at 6, and then the normal years before that at 61, 67, and 100 dating back to 2017.  So at least historically speaking we're not seeing a foreclosure issue as of yet.

We entered 2022 with a 10 year minus 2 year yield curve of positive .89%.  We are ending the year at negative .51% with a bottom 3 weeks ago of negative .84%.  When the yield curve corrects we generally see carnage in the markets.  We do have to look forward to and I don't think that housing will be spared from further losses.  That being said that carnage will come at a time when liquidity dries up, loans become much more difficult to get and the environment is that of panic.  So if you're a person looking to buy a house and you hope to catch the bottom of the market go ahead and spare yourself that bullshit.  When the bottom of any market forms is when the vast majority of people want nothing to do with it, everything is difficult and scary and all your friends look at you funny for wanting to dive in.  Trust me I know, I bought my first house in 2010.

Long story short guys I think 2022 we saw the bubble of 2020 and 2021 finally start to burst.  I think in 2023 this will come to some sort of a crescendo and we will likely see long term bottoms form acorss the stock markets as well as the housing market.  I could be wrong and maybe the can lands in 2024 but I really don't think that we as a population are solvent enough to sustain this little shit show for very long.

Once the can lands we will be faced with another crisis of some sort.  I don't know what that is but whatever that event is will probably right the yield curve as the Fed is forced to lower rates.  At that point we should see a bottom form out across the markets as people panic.  And for the first time in my life and hopefully not the last I hope to be there ready, with those of you that want to play along by my side, and capitalize the shit out that meltdown.

I love you guys, I appreciate the support I get from all of you and just knowing that you guys read this stuff that I write makes me feel valued.  I wish you nothing but the best in 2023 and I hope that you understand where I'm coming from here.  Make long term plays, suffer through the bullshit, and come out ahead of everyone that simply reacts without vision.  Play the long game and win my friends!