1655 active single family homes on the market right meow.  That's 19 less than last week.  This reduction can be attributed to the high number of cancelled and expired listings (about 100 this week, get your dialers ready and prepare your value proposition fellow degenerates) as well as to the fact that August generally sees a slow down in activity due to kids going back to school.

Based on the showing activity I'm seeing and the stuff our buyers are doing there are plenty of houses on the market today.  Over 400% more than in mid April to be exactish.

Yields on 10 year T notes are around 2.85% having gone as low as 2.65% or so earlier in the week.  Yields on 2 year T notes are at 3.25%.  That yield curve inversion is the deepest we've had since before the dot com bubble popped in 2000.  Deeper than leading up to the 2008 meltdown.  I'm not saying that's what's going to happen, I'm just saying that politicians are telling us we're not heading for a recession while numberpictures don't lie.

Some pretty interesting stuff going on with commodities.  Let me say it this way, the way that commodities pricing is setting up says to us that we already are in an economic slowdown and are expecting a further slowdown.  Oil is down below $90/barrel which puts us below the level at which we were February 24.  February 24 you may recall shit popped off in Eastern Europe.  Said shit is still popping off yet prices on oil are dropping which means that the fears of an economic slowdown exceed the fears of a supply disruption.

Lumber just hit $478/1000 board feet.  I'm a little reluctant to celebrate because the $450 or so level has acted as support twice for lumber with it bouncing up over $1,000 quickly.  Check this out. 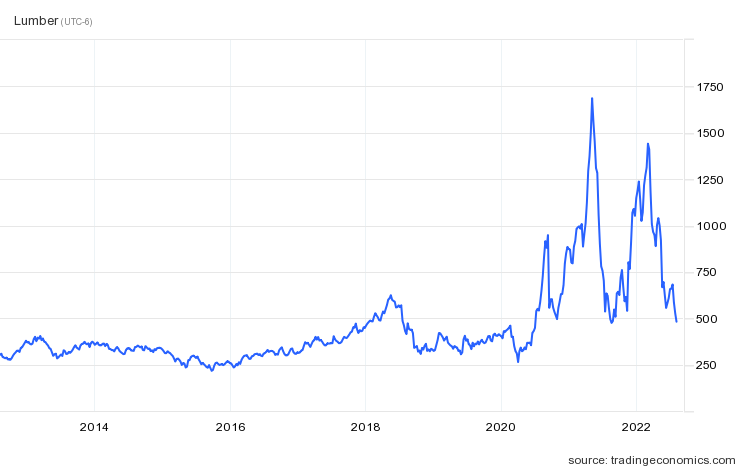 Will lumber just bounce right off this level and go back up?  I don't know.  But let's ponder this.  Now that builders are able to get building materials for significantly less, and now that houses aren't pushing record prices month after month, do you think builders will begin to compete on price?

I know that builders in some areas are offering huge incentives to move existing inventory.  I saw one offer out of the Houston area for 30k in incentives off any new build from a particular builder.  I'm seeing more flexibility in our local market than I have in probably 5 years from builders.

Think about the impact of the following situation.  Builders have been raising prices like crazy the last 2 years to keep up with costs and because the market would bear it.  Buyers paid whatever they had to pay to get into a new home.  Now at least the price of lumber, which makes up like 25% of a build, has come down significantly.  If builders begin to lower prices even gradually how do you think that will impact sellers, especially sellers with 0% down VA loans, in areas like Lorson Ranch for example?  I'm not picking on VA I'm making this example because the typical VA loan is at like 103% loan to value the day of closing.  So let's say the typical house in a community last year was 500k.  VA buyer now has a loan for roughly 515k and a new house.  Sick.

But what if the housing market takes even a 5% correction?  Now the house is worth 475k.  Subtract the fees associated with selling a house traditionally or to an ibuyer and you end up with another 5-9% off top.  So its completely realistic for our seller to be upside down on a house by 70-100k real quick.  Hmmmm, you mean markets don't just always go up?

^^^^That is the reality for a lot of people that bought new builds in the last year and a half.^^^^

Specific to Lorson Ranch the drop in sales volume mirrors the overall trend.  Last July they had 66 homes sold for a median of 460k, this July they had 39 total sales with a median price of 475k.  If you bought a house last year for 460k, add another 10k VA funding fee, you're not breaking even on that house this year.  Stop thinking of housing the way you think about your Robinhood account.

Now if you buy a house because you need a place to live for the long term and understand that renting is a waste of money fluctuations in home values don't mean a whole lot.  But when you take advice from a dipshit agent that tells you values will keep going up 10-15% a year, and you need to deploy in less than 18 months, you're going to become a landlord or an expert in the foreclosure process.

I know I say this week after week but real estate is best played as a long game.  Yes you can make money flipping houses, yes sometimes you can get lucky and catch a wave like everyone did over the last 2 years, but generally real estate is a long play.  Don't worry about what anyone tells you your house is worth, don't worry about Zillow, and just don't worry at all because you took out a 30 year loan that you intend to pay off!

Play the long game.  I can show you how.  It's boring as shit but it allows you to sleep better.  Turns out making money over time is pretty boring, its the financial flare ups of people ramping up and burning out that make for good and wholesome entertainment.