Writing these updates every Friday for like the last 3 and a half years has been one constant in an otherwise pretty chaotic life.  So I don't really like missing weeks.  So here we are on a Sunday, just for consistency.

Today we have 1,759 existing single family homes on the market in El Paso County.  This is up every so slightly over last week.

Month to date we have seen 743 sales close out MLS wide for a median sold price of $480,000.  Since last week our sold to original list price ratio dropped slightly to 99.37%.  This ratio peaked at around 104% a few months ago.

So in a nutshell you can see sales activity slowing down which is a trailing indicator of the market. And it confirms the leading indicator of several months of plummetting mortgage applications.

Interest rates have remained relatively volatile last week with yields on the 10 year T notes bottoming around 2.75% and then rebounding to 2.98% on Friday.  The DXY which monitors the dollar's relative strength to other currencies has rebounded to over 108 which is the highest level in about 20 years.  Don't read this as great news necessarily because this does not mean your dollar is stronger than it was last year, it just means it's performing better than a basket of currencies that include the Euro and the Yen.  So it's like while the whole world has plunged into an inflationary crisis the US is doing relatively better.

US inflation figures came in at like 8.5% this month.  The shitty little country that I'm from has an inflation rate right now of 21.5%.  They run on the Euro and the European Central Bank has made it pretty clear that bond buying aka uncapped money printing will continue.  Meanwhile the Fed here has at least downsized it's bond buying program if not started liquidating it's holdings.  So while we are very obviously still in an inflationary squeeze, hey, Europe has it worse.

Europe also has it worse because they are pretty heavily dependent on Russia for natural gas.  The price of natural gas in Europe right now is something like 7 times higher than in the United States and people are legitimately freaking out about the coming winter.  If faced with the options of feeding your children or paying your utility bill people are going to be stuck having to make some impossible choices.  And when people have to make impossible choices often times that leads to civil unrest and maybe letting some heads roll.  If I was a central figure in European politics I'd be kind of nervous right now.

A while back a much smarter real estate agent than myself started working on a system that would allow him to analyze our local market data better than just the MLS can.  His name is Rob Thompson and if you're friends with him on the Facebook you can see a lot of the cool graphs he shares.

A lot of agents on the Facebook throw out their own opinions on what the market is doing and why.  There was quite a bit of sentiment saying that it is specifically interest rates on mortgages that drive home pricing.  And here is an interesting numberpicture showing that to be basically false.  The correlation between interest rates and median home pricing is weak at best.  The correlation between agents being broke and being willing to say anything to get a closing is probably very high. 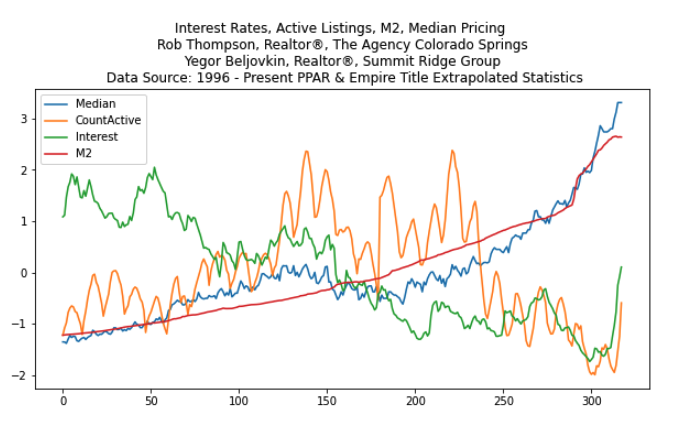 Let's explain this a bit.  The Y axis is basically irrelevant in this graph.  The X axis indicates months passed since 0.  This data goes back to 1996 so like just over 300 months.  The whole set is run through software to normalize the data to where it all fits into the graph without compromising the relationship between the data sets.  The whole point of the graph here is to show how the 4 data points correlate to each other.

The red line is M2 money supply.  The blue line is median home pricing across our MLS.  The green line is interest rates on fixed 30 year conventional loans, I'm pretty sure.  And count active is our active single family and patio home inventory.

You can see how the yellow and the green lines were pretty far apart for a long while without much correlation at all.  As of recently though the spike in inventory levels and the spike in interest rates has a pretty strong correlation.  Over time the two had a very weak correlation, but I guess when rates double in a matter of months and market demand falls through the floor there is a pretty neato correlation there.  For now.

But look at the blue and the red lines.  Those two are always close and often on top of each other.  The correlation over the span of this graph between M2 money supply and median price is .89.  A correlation of 1 would be absolutely perfect.  A correlation of .89 is a very strong one.  Where the blue line runs above the red would signify to me periods of greed in the real estate market and where it runs below the red line would signify periods of fear where the housing market isn't quite keeping up with inflation.  The term over extended is often used in trading lingo and one might say the housing market is overextended.  I feel this way, buyers seem to feel this way too.

At the very far right side you can see the red line and the blue line both flatten.  The red line flattening indicates the Fed's decision to begin quantitave tightening, as in the opposite of easing.  And while they haven't really tightened anything they did stop easing, meaning the money printer is more or less off at the moment.  The M2 money supply has been basically flat since January and has dropped ever so slightly since March.

Here it is in perspective of the long term.

That spike represents one of biggest fuck ups in central banking history and time will only tell how we pay for it.  That spike is the biggest kick to the can down the road since at least WW2, and how that can lands is anyone's guess really.  I'm not overly optimistic about the outcome but that is because I'm a negative Nancy and Chicken Little all in one.

But back to Rob's graph.  His graph confirms that real estate works great as an inflation hedge.  And this is why I think real estate is a fantastic long term investment.  Long term being super key here.  In the long term we will manufacture many more crises, probably have some genuine ones, and the money printer will brrrrrrrrrrrrrrrrrrrrr again.  But in the short term we have to sell the people on the fact that the Fed is very serious about taming the inflation that they themselves created.

I swear our monetary system of the last 51 years is so fucking ridiculous that if aliens came to Earth and asked us how we do things they would likely go back home laughing their asses off at how stupid our system is.  These aliens would have to have asses and a pretty dark sense of humor for this to be true.

Here's another graph that shows something kind of interesting too.  You see the amount of money in the system is not the only thing that contributes to inflation.  The velocity with which it is exchanged matters too.  Like for example if you gave me $100 bucks and my expectation was that money would lose value quickly I would want to spend it as fast as possible.  In the mid 1920s in Germany people would pay for dinner before the food came out because prices could be higher by the end of dinner.   They got to printing money single sided because it got to be so worthless that it wasn't worth the ink.

I'm not saying that's what we're facing, I don't think it is in the short term, but it is possible.  Every single fiat currency in human history met the same fate and the dollar isn't special.  What is special is the whole world running on nothing more than the belief that their little digits in their online banking portal are enough to live on.  That's a first for humanity.

This is M2 money velocity bouncing back over the last year.

And this is the bigger picture with the Rona putting a massive dent into money velocity.

I know I'm diving pretty deep into nerd shit here.  And if you're still reading this down here it's probably because you're a nerd too.  That dive on the graph above is for two reasons.  1.  Everything got shut down and it was kind of hard to spend money.  2.  A lot more money got created so individual dollars weren't being spent as often because there are more of them to spend.  You get it right?  Like there's 1000 dollars in a room, the amount of goods and services you can spend it on plummets and then someone shoots another 500 dollars into the room.  The velocity drops and stays low because we can only have so many transactions.

The monye velocity thing is something that is much more difficult for central banks to control because it is much more in the hands of the consumer.  Anyway I'm going into massive rant mode and need to switch to dad mode and go take care of my little boy.  As he grows up my goal is to teach him not to be a short sighted and whiny little bitch like the people on the news.