352 is the number, last week's little dip must have been because people we're waiting till the 1st to list.   So we now officially have about 9 days worth of inventory across El Paso County with a median sold price in March at a fresh record of $475,000.  Multiple offers, appraisal gaps, all that fun stuff is still the norm.

This is my 9th year having a real estate license.  I've been waiting for the housing market to crash since roughly 2015.  My logic was that prices had rebounded off their 2011 lows in such a way that we had no chance to continue the rally.  A lot of people thought the same thing, and a lot of people still do.  I used to harp about how any minute now the market was going to crash.  What I did not understand, and many people fail to understand, is how relative the value of money is and how much easier it is to create more money than it is to create more houses.

Something I still like to harp about is the yield curve.  For the last couple of weeks I've mentioned how sections of the yield curve inverted but that it was the 10 and 2 year yields that I was specifically looking at.  Well, it's inverted.  The last time this happened was in August of 2019 and the Fed immediately went into overdive with repo operations between banks and ultimately dropped the Fed funds rate down to 0% by March 2020. 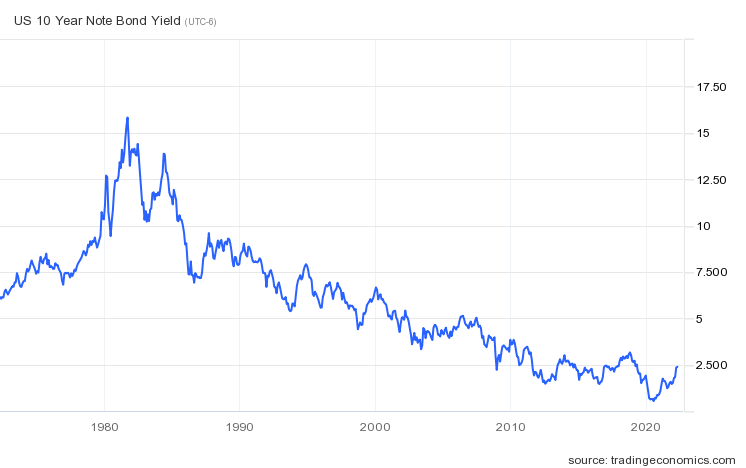 Here is a graph of the yield on 10 year US treasury bond since Paul Voelker defeated inflation in 1981.  Notice the trend since then. 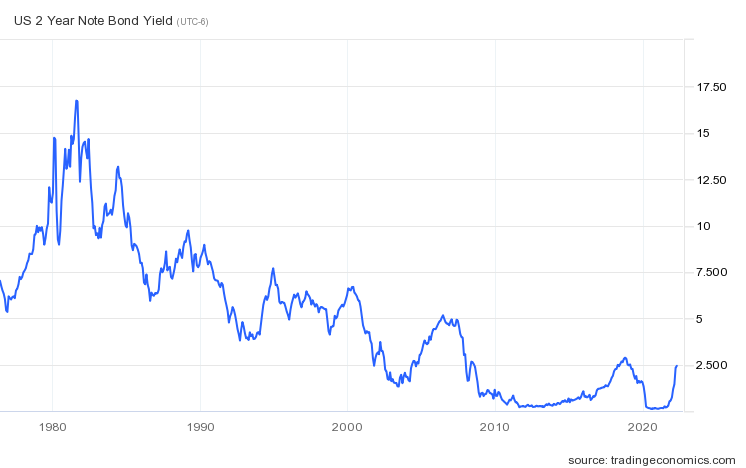 And here is the yield on 2 year treasury bonds for the same period.  Again, notice the trend.

Right now as I'm writing this the 2 year yield is .06% higher than the 10 year, and the whole yield curve across all the durations is all fucked up.  This has been an insanely reliable recession indicator since World War 2.

What's not insanely reliable is the speed with which the recession follows.  Sometimes like in the case of 2019 it took 7 months for us to officially enter a recession and sometimes it takes a couple of years.  But this is all history right?  One thing we know for sure is that the world is moving at a faster and faster pace every year.  One way to look at this in the context of economics is that it took the Fed roughly 4 years to react to the 1929 crash, roughly 7 months to respond to the 2008 crash, and roughly 1 month to react to the 2020 "crash".  When I say respond I mean crank up the money printer.

Another thing that's totally reliable is that I'm not the only one paying attention to the yield curve.  Certainly the overlords at the Fed pay attention to it.  The wizards behind the curtain are not stupid, they're just heartless, which is not the same.  But let's take a close lookie poo at what the Fed does when the yield curve flips.  First, two numberpictures.  Then commentary.

Alright, lets go back in time.

Yield curve inverts in August of 1978, the Fed then continues to push rates higher from 8% to 18%.  It takes 2 years for the inversion to reverse and for the US to then enter a brief recession.  This is all in the context of a currency war between the US, Japan, and most of Europe.  There were a series of currency devaluations during this time around the world that contibuted to this very unstable period that finally ended with The Plaza Accord of 1985.  You can see that the yield curve inverted again almost immediately after being corrected in 1981, the Fed then spiked rates to almost 20% which sent the US into a deeper recession fueled by the super high cost of borrowing.  This was the one time that the Fed jacked up the Fed funds rate above the real yield (rate of return minus rate of inflation) and succesfully, albeit brutally, ended that inflationary cycle.  This was an exceptional move by a person who did not give a single shit about his popularity.  Ask anyone that bought a house in the early 80s about this.

Next inversion comes in March of 1989 on the back of about 3 consecutive years of the Fed raising its funds rate from roughly 6% to roughly 9%.  This is where our pattern becomes more evident.  In March of 1989 the Fed immediately reverses course and drops the funds rate from 9.85% in March 1989 to under 3% by 1993 before the next tightening cycle begins.

December 1994 the yield curve looks like its about to invert, Fed has been raising rates up to 5.5% at this point.  They proceed with one more rate hike to 6%, keep the yield curve from inverting and float at roughly that rate for the next 6 years.

From June 2004 to July of 2006 we see the Fed once again tightening by raising the funds rate from 1% to just over 5%.  A pretty balsy move but by comparisson to the early 1980s kind of looks meek, doesn't it?

Between February of 2006 and May 2007 we have several shallow inversions of the curve.  The Fed initially keeps rates steady before the 2008 financial crisis hits and rates go to basically 0 for the next 9 years.  You guys all remember the financial crisis and all the opportunities we all missed on because we thought the market was going to go lower.  Most of us, myself heavily included in this, are financial morons.

Next yield curve inversion barely even inverts in August of 2019.  This is on the back of all my colleagues telling all their clients how rates have no way to go but up.  Between 2016 and August of 2019 the funds rate drifted upward from 0% to about 2.4% before the inversion, at which point we got hit with a liquidity crisis in banks and then the Covid.  March of 2020 rates hit 0% again.

Before I go into guessing what's going to happen next let me put this whole rant in the context of real estate prices over this same period of time.  These are national averages.

You can see that each recession after each yield curve inversion brought with it a slight dip in housing prices in the short term, followed by a resumption of the upward trend each and every time.  You'll notice that the angle of the line keeps getting steeper and steeper and without thinking might think that it has to reverse.  Well that's not true, because of the following graph.

Follow the money as they say.  This is M2 money and notice how the spike in it's supply directly correlates with both the last yield curve inversion and the spike in real estate prices.

Going back to the world moving faster and faster and getting smaller and smaller.  The money supply expansion is not a purely American thing.  The whole world is doing the same thing.  Without going into the mechanics of global trade and currency manipulation it would make 0 sense for the US, or any other country, to reverse course on money creation because that would make their currency more expensive and their export business would get crushed by that.  Also tarriffs come into play here...it's too much for this blog.

Here is my analysis.  The Fed of today is not the Fed of 1980.  We had a national debt of 908 Billion USD, or 32% of the GDP in 1980.  Today we have a national debt of 31 Trillion dollars, or about 126% of GDP.  The Fed cannot jack the rates up like they did in 1980 without absolutely devastating the entirety of the US economy as well as the credibility of the Federal governent as it will be challenged to make debt payments at higher rates.

My bet.  The inflation isn't transitory at all and we should probably get accustomed to it for the next few years.

And owning real estate is the only inflation hedge you can live in.  Forget the idea of timing the market.  If you currently rent, and you intend to live here for at least five years or so, then you are losing by not buying.  Regardless of if the rates are at 3% or 6%, regardless of the price and regardless of the market as a whole you are losing by renting for the long term.  After all, the rent is based on the market.  Long story short don't bet against the housing market in the long haul.

I know this is super nerdy, I kind of went mildly off in this one.  If you want me to do a market analysis of your home or send you like quarterly market updates specific to you please let me know.